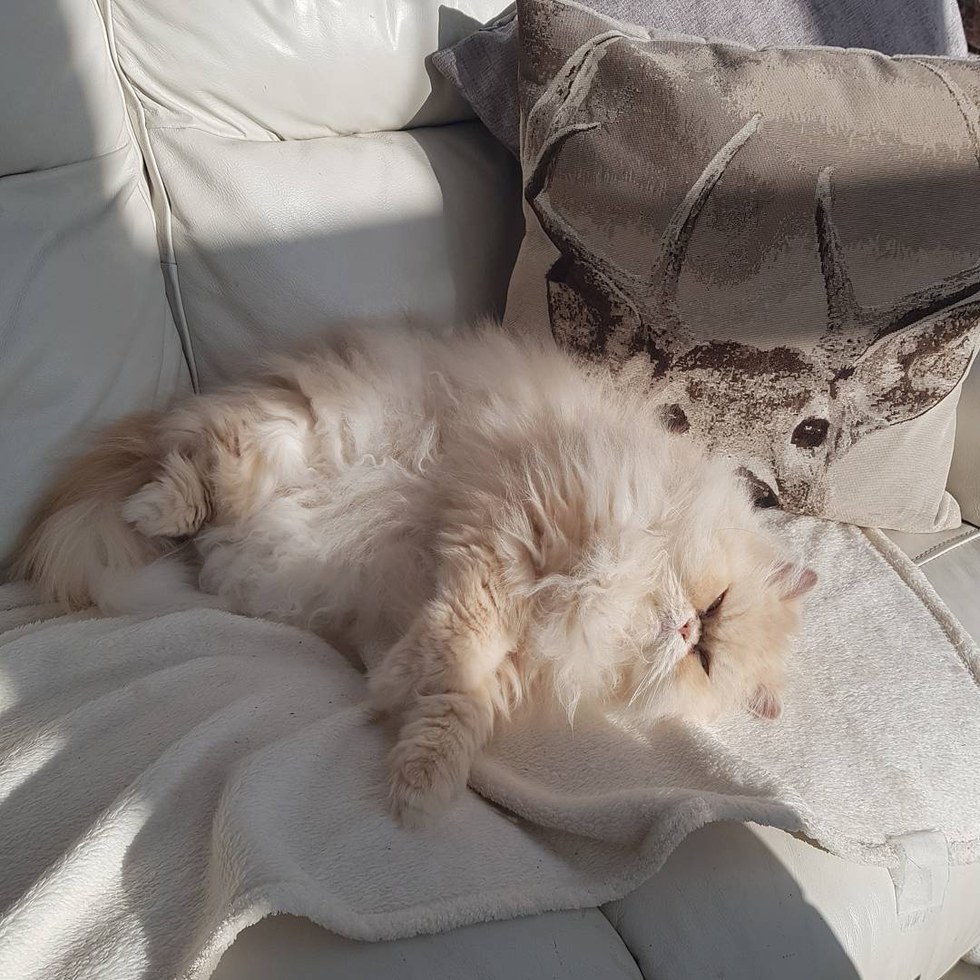 
Seven years ago a family from the UK brought home a beautiful kitty who changed their son’s life forever.

Their son, Kian, was four years old when he met Simba the cat who waltzed straight up to him as if he knew exactly what the boy needed. Kian was born premature and as a result had many health issues. “He has autism, secondary immunodeficiency syndrome and degenerative bones and soft tissues,” Becky Green, Kian’s mother, told Love Meow.

Kian would regularly stop breathing without showing any signs, whether it be eating, playing, sleeping, or anything. Simba quickly learned to alarm his humans before the event so they could be prepared with the necessary apparatus and medicines. “He once was walking along and just fell like a lead weight to the floor unconscious,” Becky said.

“At the time Kian spent most of his life screaming and self harming – the world was scary for him as he was so often in hospital, but Simba was his safe place. He would sit with Kian and calm him, sit on the sofa next to his head, go on his head if he was banging it on the floor, or place his paws on Kian’s hands if he was hitting or pinching himself.”

Every night Simba takes Kian to bed and waits with him until he falls asleep. The two are inseparable, and Simba always keeps an eye out for his best friend. 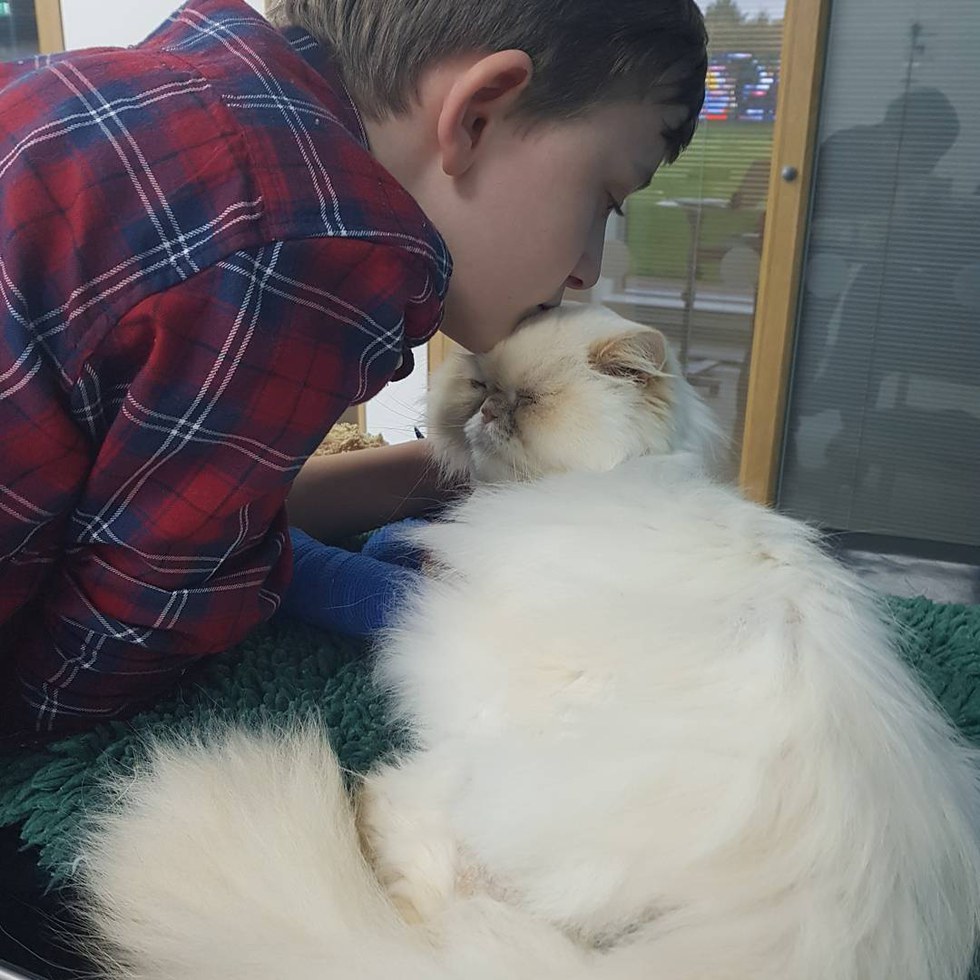 On October 9th, Simba’s life took a sudden turn. That morning while Becky was out taking her children to school, Simba dashed out of the front door. Becky’s mother kept calling for him but couldn’t see him until Becky received a Facebook message saying a neighbor had seen him hit by a car.

“I drove home as fast as I could and when I called him he tried to rub to me but his legs were so mashed up, facing the wrong way…. I picked him straight up and ran to my car. My mum sat in the passenger seat holding him and he purred and purred like a lion,” Becky told Love Meow. 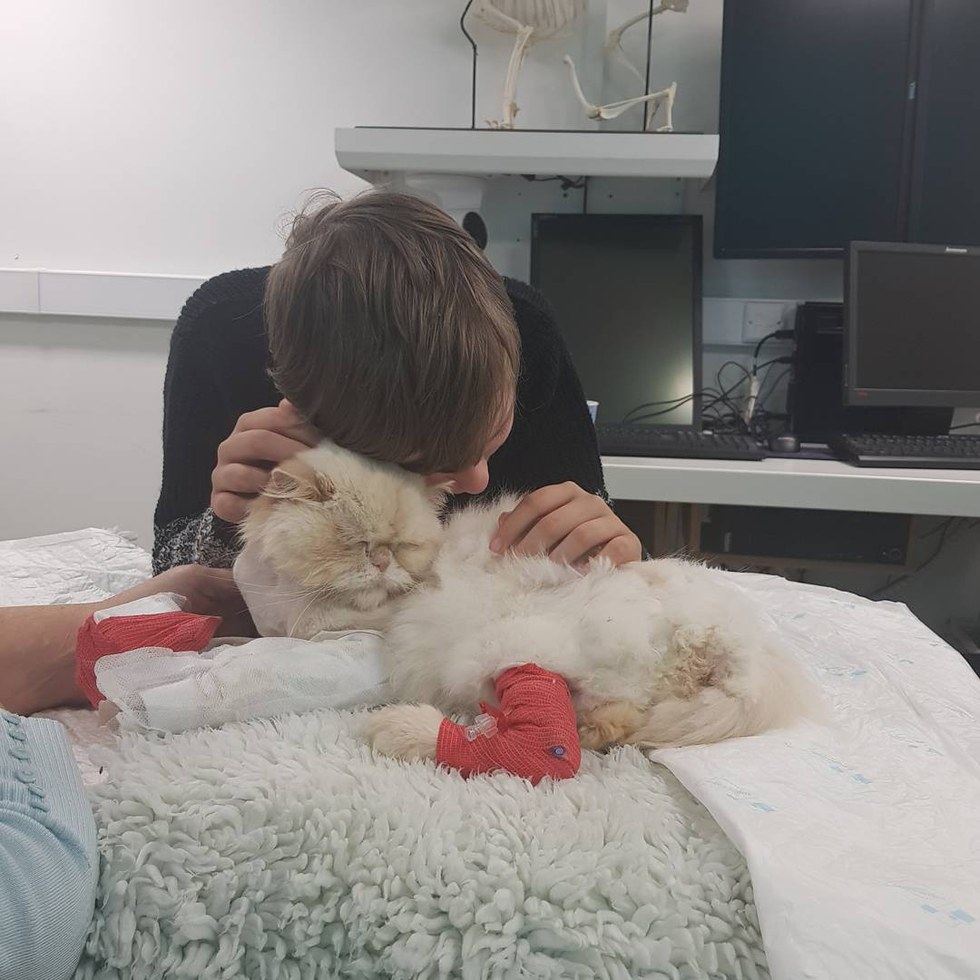 She immediately notified the vets and once they got there, they laid him on the table and were completely devastated by the injuries. Both of his front legs were severely damaged.

“Simba was purring and giving us the love look deep into our eyes. When they said he had no internal injuries, we knew we had to try for him. The vets knew they couldn’t help as he needed specialists, so we took him to Queens in Cambridge the next day.” 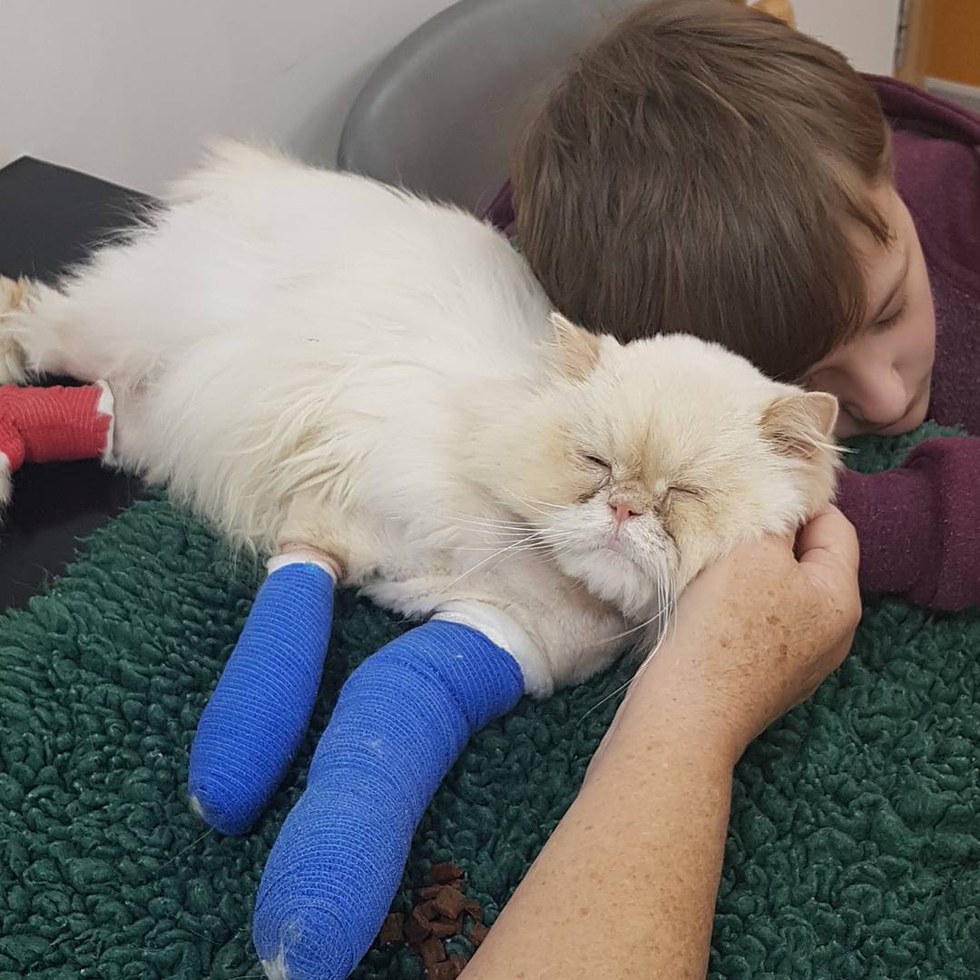 When the specialists suggested to “put him down and get another cat”, Kian started screaming.

“Kian was with us and hysterical – he laid on the floor begging the vet to try. She said she’d look at him under anesthesia but she thought he should be put to sleep as it was a big job,” Becky told Love Meow.

“They brought Simba in to say goodbye to us, and Kian was inconsolable. Then Simba tried to crawl to him but with only his back legs working, he used them to push himself across the floor. I stopped him, and he looked up at me and tried to meow – he wanted Kian.” 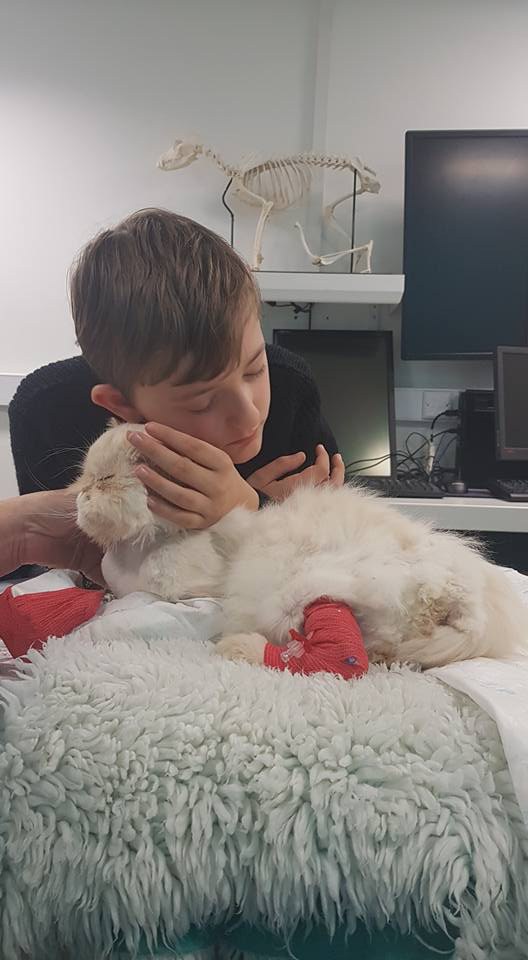 Becky picked him up and laid him on Kian. Instantly Simba began rubbing his face on Kian’s to calm him. He wanted to help his best friend despite needing help himself.

“It was the most heartbreaking moment of my life. The veterinary nurse told me to try as ‘that cat wants to live’.”

Becky called Professor Noel Fitzpatrick, a world-class orthopaedic-neuro veterinary surgeon, and they took him in the following day. 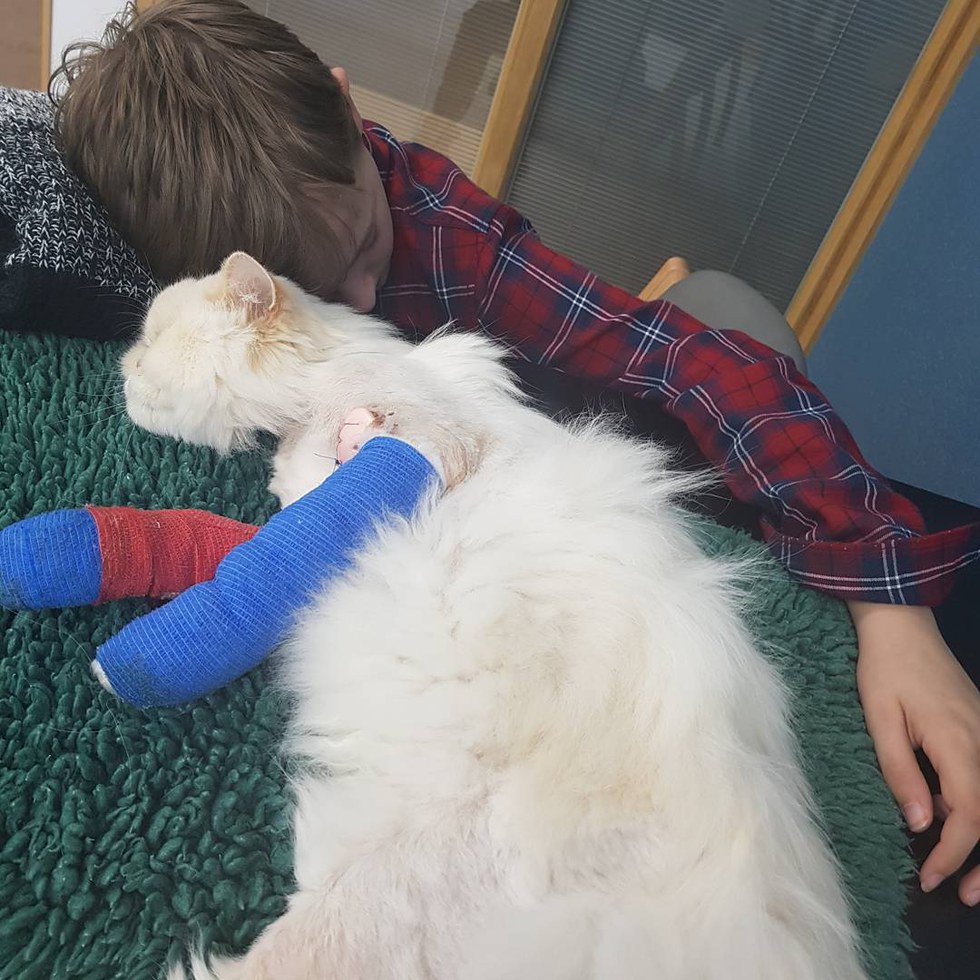 “The wonderful surgeons whisked him straight to surgery and said they could save him or at least try. He has since been there for seven weeks. He’s had numerous operations for skin grafts, bone reconstruction techniques that only they can do in the world,” Becky told Love Meow.

Kian insists to visit Simba as much as he can to offer him comfort just like how Simba would to him. 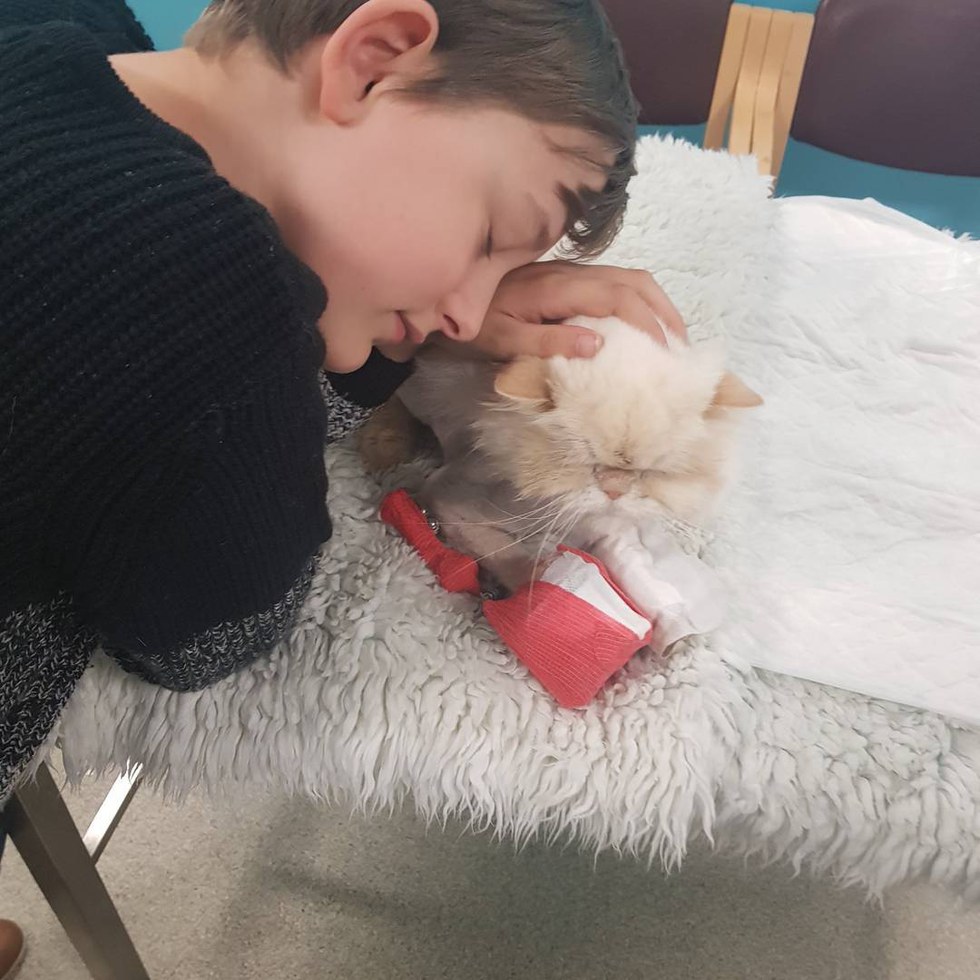 They can’t wait for Simba to come home. “He will have to remain in a crate but it will be so nice to have him home for a while so he can relax and recharge. Every day we have an in-depth conversation amongst ourselves and with his medical staff on whether we should continue to do this, and every day he sits up and says, ‘hey I’m still here, still fighting. Don’t give up.’ He never ever hisses, bites , scratches or anything.” 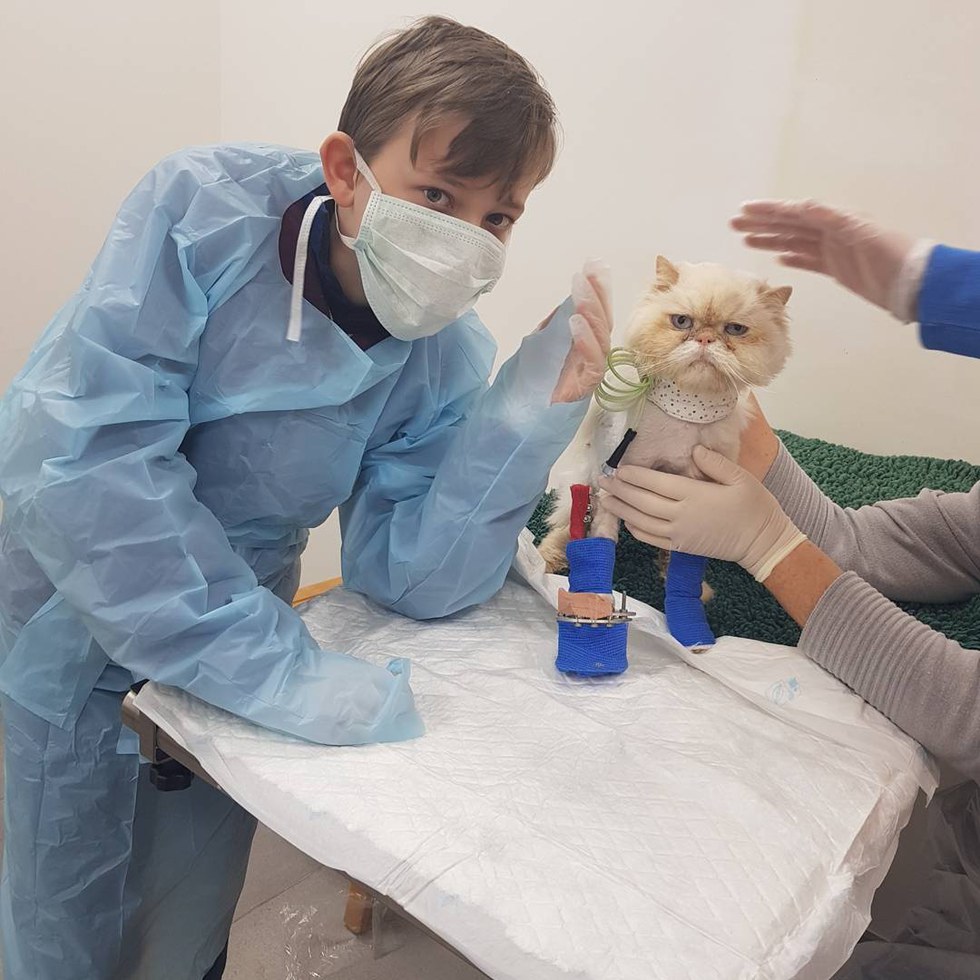 Kian is not giving up on his best friend as he knows Simba has been doing the same for him.

As Simba says, “I’m now a superhero as I have the foot of wolverine, Spiderman’s web as a cage, and a bone growth serum that Kian says, I can now apply to be in comics with. Everyone kept saying I wouldn’t survive. But here I am. Fighting. Staying alive.” 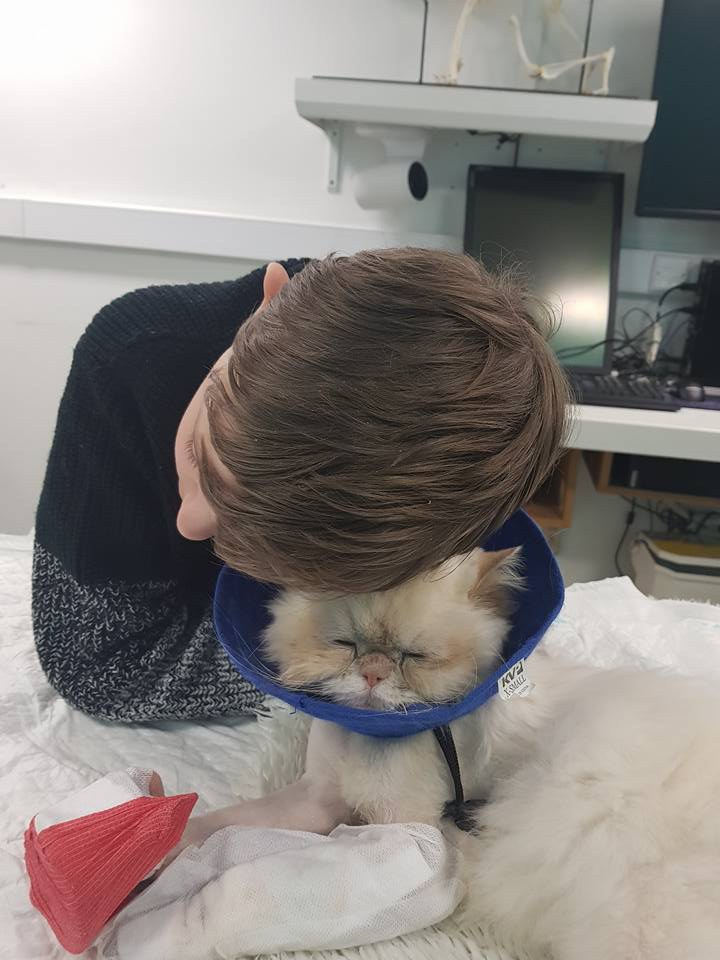 Related story: 14-year Old Boy Dives into Overpass to Save Cat Hanging Over Bridge – Kitty Clings to Him for Life

Kitten that Hops Like a Bunny, Turns into the Happiest Cat with Endearing Personality
Cat Came into Woman’s Life with Her Kittens After Years on the Streets, and Decided to Stay Forever
Forget CORONA, here are FUNNY ANIMALS! 🐶 🐱🐴😂
Kitten Who Showed Up at Apartment and Made it His Home, Has Grown to Be a Boss Cat
Kitten Who Has Strong Will to Live, is Determined to Do Everything Just Like Any Other Cat