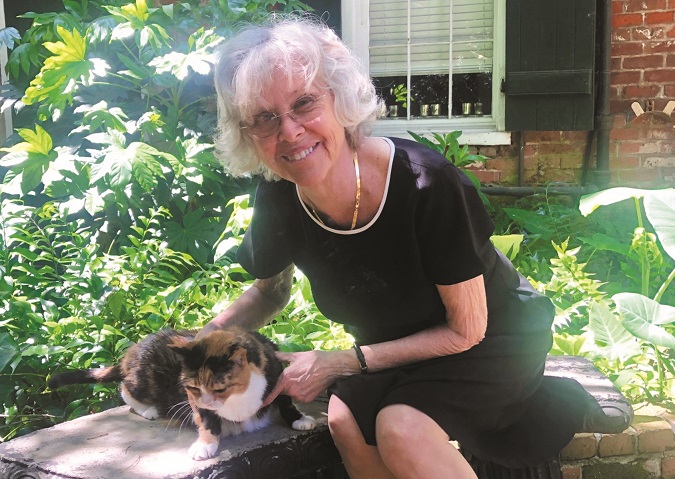 
When a love for cats is fueled by passion, a dream can become reality. This encapsulates the story behind Esther Mechler’s organization Marian’s Dream and their Feline Fix by Five initiative to educate America about the benefits of spaying and neutering cats before they are 5 months old.

“When it comes to spaying and neutering cats, timing is so important,” says Esther in explaining the mission of her Feline Fix by Five program (felinefixbyfive.org). “Research has shown that if a cat is spayed before the age of 5 months and it coincides with the end of kitten-required vaccinations, this can greatly reduce unplanned and unwanted kitten litters and thus greatly help reduce the homeless cat population.”

Esther’s father worked for a company that tested pet food. When one of the taste-testing kitties produced a litter, he brought two kittens home as pets for his daughters Esther and Marian. The sisters named them Tipsy and Topsey.

“They lived well into their late teens,” Esther recalls. “And, when Marian passed away in her 20s, not long after the cats had died, the family decided to start a foundation in her honor dedicated to the well-being of animals. Although the original goal was to help all animals, they decided to focus on companion animals. “We quickly discovered that at that time,” she says, “there was no organization focused entirely on spay and neutering domestic pets.”

The now nationally recognized SPAY/USA program originated in the basement of Esther’s house in Bridgeport, Connecticut.

“I started small, working with a few local veterinarians who understood that spay and neuter surgeries cost more than people were able, or willing, to pay. We quickly discovered that this financial issue was nationwide. So, we started a listing of veterinarians who would offer a discount if needed and helped set up local spay/neuter programs and clinics. Over the course of two years, we expanded the service to all 50 states.”

In May of 1993 Cat Fancy magazine (now Catster) ran an article about SPAY/USA, and the result was 23,000 calls to Esther’s basement office over the course of a month!

“We were happy when North Shore Animal League America offered to take over the program, hire phone counselors, set up an office and computerize the growing database of service providers,” she says.

For the next 17 years, Esther ran the program for them. In 2010, she left theorganization to focus her attention exclusively on cats. Thus, the Feline Fix by Five program under the umbrella of Marian’s Dream was born with the goal of enlightening cat lovers about the benefits of spaying and neutering before felines are 5 months old.

“Further, the importance of appropriate timing to spay and neuter cats cannot be overstated, as it’s shown to be better for long-term feline health by lessening the risks of significant morbidities in later life stages, including the risk of malignant mammary tumors,” she adds.
Of course, getting this message out into the catmosphere is an ongoing work in progress.

“We need to reach pet parents everywhere to make them aware so that they will ask for this timing for the surgery at their own veterinarian’s office,” she says.

Stray Kitten Hopped into Hearts of Family and Blossomed into Gorgeous Cat
Full Circle: Finding a Kitten's Family!
Little Kitten & Friends – Fun Pet Care Kids Game – Little Kitten Adventures
Wobbly Kitten Insists on Giving Other Cats Hugs After He was Rescued
Cat and Her Overly Attached Kitten Hope for Home Together After Life on the Streets