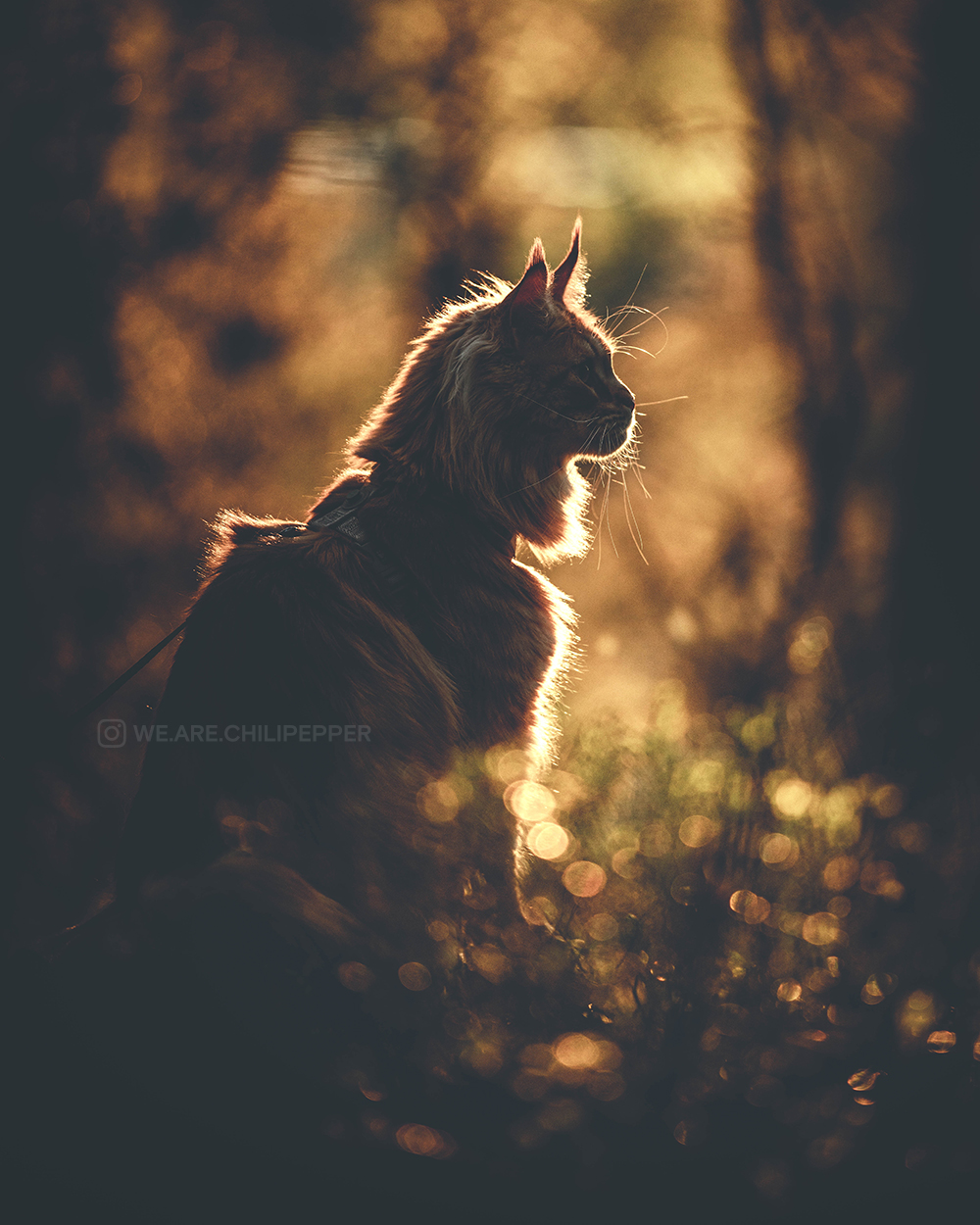 
Three adventure cats from Norway have captivated the Internet with photographs that are nothing short of magical.

To scroll through their pictures is to be transported into a fairy tale where regal felines rule the forest with the sun at their backs and the wind in their fur.

While you might expect that The Spicy Trio’s owners, Camilla and Sondre, share a penchant for hot foods, they actually named their kitties after one of their favorite bands, The Red Hot Chili Peppers.

Camilla and Sondre welcomed Chili and Pepper into their home first, and Limo — who’s named after the lemon drop pepper — joined the household a bit later.

The family lives in the southeast part of Norway, and while it might seem like Chili, Pepper and Limo wander the vast forests and fields of Scandinavia all day and night, they are actually indoor kitties! Camilla and Sondre take them on harnessed walks four to five time a week. It’s during those walks that the cats become the magical models for their ethereal photos, images that are unlike any others.

Self-described “huge animal lovers,” Camilla and Sondre bring joy and wonder to fellow animal lovers online. Their @we.are.chilipepper Instagram account has been running only since April of 2018, but it’s already amassed 74K followers.

The photos are each singularly remarkable. When asked how they get such stunning photos, Camilla and Sondre shared these kitty camera tips.

“Always bring treats or a toy to get your cats’ attention and to reward them when doing a good job. Let them associate the camera with treats and positivity. Invest in good lenses; good equipment does half the job. Experiment with the manual settings and get to know your camera. Also, shoot in RAW — then you’ll have more opportunities when it comes to editing.”

It seems hard to imagine, but before the cats became the poster kitties for adventure cats near and far, they started out just like other outdoor newbies – learning the ropes at home.

Camilla and Sondre explained that the first step was to get the cats used to wearing harnesses. (For extra safety, Chili, Pepper and Limo also wear GPS trackers from pet tech company Tractive.) To transition from indoor exploring to setting paw in the great outdoors, the pet parents first showed the cats their garden.

“When we started to walk further away from home, we started to bring a backpack, so they could hide if they ever got scared,” they said. “In most of our photos we’re actually just 50-100 meters away from our doorstep.” 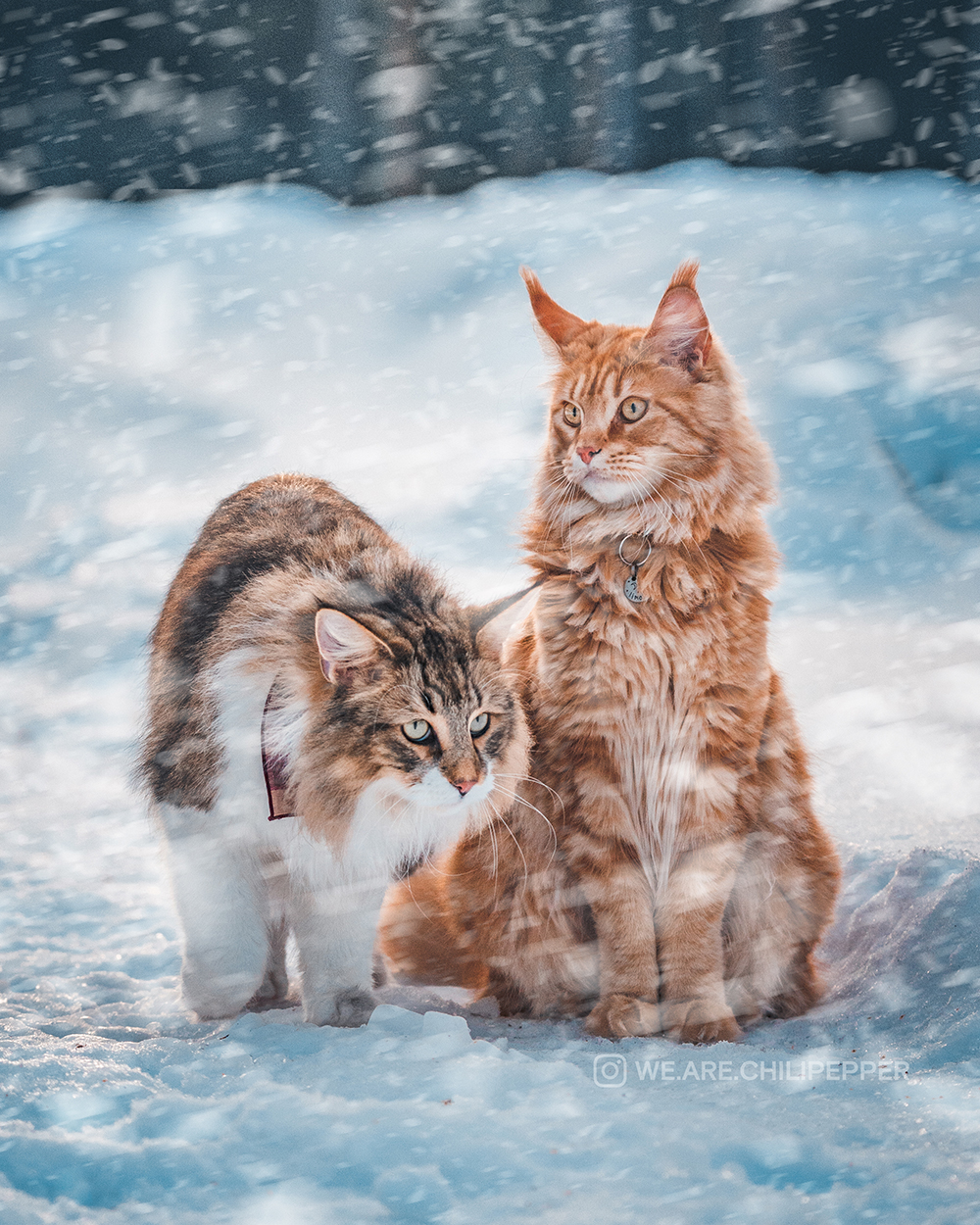 In case you were wondering which of the three kitties has the biggest appetite for adventure, that’s Chili. Camilla and Sondre describe her as “the bravest one” who is “constantly moving and exploring.” As for Pepper and Limo, they prefer, “just sitting in the nature, taking in all the impressions.”

Looking at The Spicy Trio’s photos will surely inspire you to appreciate the beauty of nature — cats included.

“[We] love that the moments spent with them give [us] a break from normal, hectic life,” they say. “Time stands still when walking them into the woods.”

It’s fitting that each of @we.are.chilipepper’s photographs represents a moment frozen in time, images which capture the beauty of cats and the spice of adventure.

All photos are courtesy of @we.are.chilipepper. Scroll through the gallery at the top of the post to view more magical cat images.

Woman Helped Kitten, Couldn’t Stop Thinking About Her and Traveled Across States to Bring Her Home
Hissing Kittens Are So Scared But With Time And Love Something Amazing Happens | The Dodo Cat Crazy
Kittens with Sweetest Smile Seek Attention from Everyone and Hope for Dream Home Together
Cat with 3 Legs Went Back to House Where He Discovered Kindness, and Found Family of His Dreams
Kitten Found in Backyard with His Siblings, Grew Unique Coat, Determined to Thrive