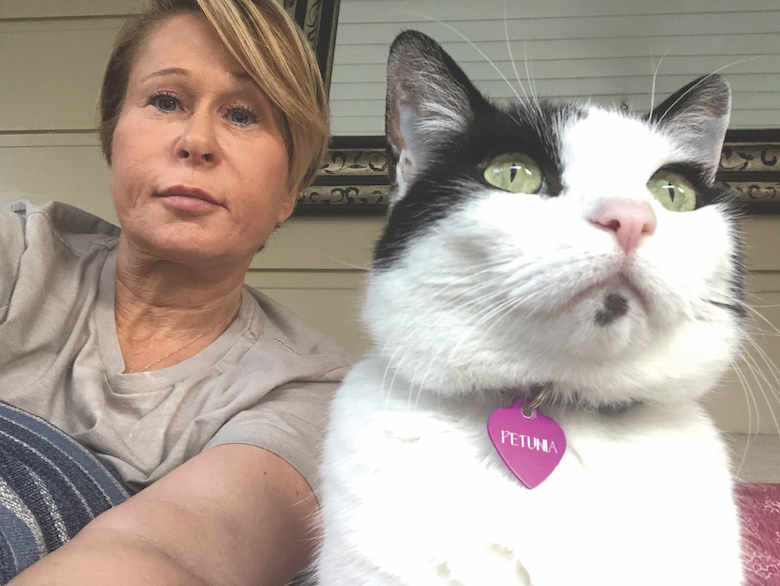 
For three decades, Yeardley Smith has voiced one of sitcom historyŌĆÖs most iconic characters: Lisa Simpson, the precocious, saxophone-playing 8-year-old on The Simpsons. Although The Simpsons may be her most recognizable role, Yeardley has a show business resume thatŌĆÖs impressive by any standard.

SheŌĆÖs appeared in numerous TV and movie roles and recently founded her own production company, Paperclip LTD. She also cohosts a popular true crime podcast called Small Town Dicks. Her cohosts are two real-life detectives (and identical twins) known only as Det. Dan and Det. Dave (to protect their identities).

When not working, Yeardley spends time at home with her best friends, Zipper and Petunia, her 12-year-old cats. She hadnŌĆÖt been looking to adopt cats; at the time her life had turned upside down. ŌĆ£My second marriage split up,ŌĆØ she says. ŌĆ£WeŌĆÖd had two cats, and one of them had died a few years ago. That was Clementine. We still had Betsy ŌĆö and Betsy was a handful. She was beautiful, but she was nervous and kind of like a domesticated feral cat.ŌĆØ

Yeardley adopted her feline friends Zipper (left) and Petunia when they were about 8 to 10 weeks old. Although they arenŌĆÖt littermates, they were bonded enough to keep them together. Photo: AF archive | Alamy Stock Image

Not wanting to further upset Betsy, who was then 15, Yeardley suggested that the cat continue to live with her soon-to-be ex-husband to keep her in familiar surroundings. Yeardley would visit to maintain a relationship with Betsy. While purchasing gifts at the pet store for an upcoming visit with Betsy, Yeardley spotted Zipper and Petunia together in a cage at an adoption event. ŌĆ£I said to myself, ŌĆśNo, no, no. I canŌĆÖt. My life is in flux,ŌĆÖŌĆØ she says. ŌĆ£But I couldnŌĆÖt stop thinking about them and then two weeks later, I went back to the pet store and the same adoption group was having another adopt-a-cat day,ŌĆØ she continues. ŌĆ£And they came home with me.ŌĆØ

TheyŌĆÖve been a close-knit family ever since. Yeardley built an elaborate cat gym ŌĆö only for them to ignore it in favor of rolled up Post-it notes. Luckily, it looks like a piece of Danish sculpture ŌĆ£because itŌĆÖs literally on the wall of the stairwell,ŌĆØ Yeardley laughs.

YeardleyŌĆÖs love for cats goes beyond her home. A cat that inhabits PaperclipŌĆÖs parking lot is well-taken care of. ŌĆ£We call her Lily of the Alley.ŌĆØ SheŌĆÖs also lent her name and donated money to animal welfare organizations, such as Best Friends and ASPCA. ŌĆ£I feel strongly about giving the best chance to our furry friends,ŌĆØ she says. ŌĆ£Anything we can do to make their lives a little bit better, a little more comfortable and work with them. Just because we donŌĆÖt speak their language, itŌĆÖs arrogant to think their needs are less than ours.ŌĆØ

Her own cats inspire optimism. Zipper and Petunia run to their human when she arrives home. Even Zipper, who went deaf a few years ago, somehow manages to know when Yeardley arrives home. ŌĆ£I love that kind of greeting, that love. It never wavers. IŌĆÖm so grateful for that.ŌĆØ

Read Next: 5 Cat Movies That Are Perfect for Kids