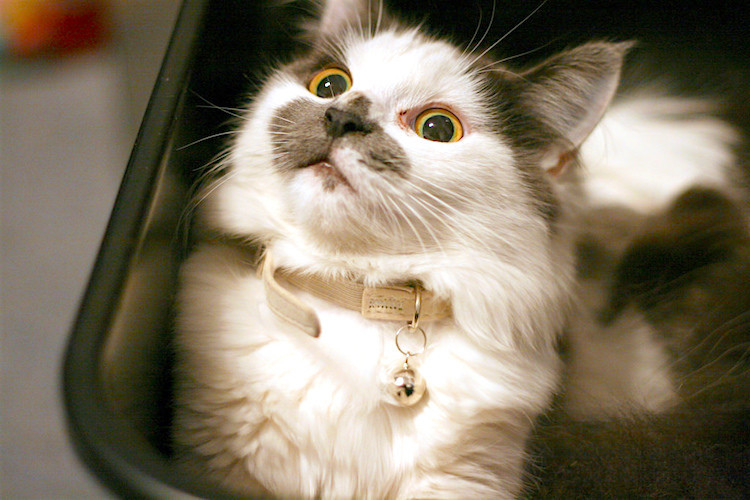 
The collar was a rich, deep purple and had a brass star-shaped I.D. tag. It would look well against Emrys’s ruddy Abyssinian fur, I thought. Only Emrys didn’t want any part of it. He didn’t bite or scratch — he just looked up at me, totally bewildered.

Now, my cats don’t go outside. They don’t even have an enclosure or a catio. But they wear collars and I.D. tags just in case one of them manages to slip out. Some have been a bit hissy about it at first but then settled down within a relatively short amount of time.

Emrys had never worn a collar before and looked miserable, as if he were being punished. So after a while, I removed it and tossed it into a drawer. Emrys then acted like the fairy-tale prince who had just been awakened from an evil spell. The light came back into his eyes, and he leapt around the room and up onto his cat tree, rejoicing in his freedom from neckwear.

A Study on Collars and Cats

In 2010, Dr. Linda Lord of The Ohio State University, Dr. Margaret Slater of Texas A&M University, Dr. Julie Levy of the University of Florida and Brenda Griffin of Cornell University conducted a 6-month study on the subject with the assistance of 538 cats. During the study, 391 of those cats wore their collars without mishap. The other 115 either lost their collars, scratched or kicked at them nonstop — necessitating their removal — or got them caught on something, the “something” in question occasionally being their lower jaws.

“A lot of people start out with the dogma that cats can’t wear collars, that they won’t tolerate them or that [the collars are] dangerous,” noted Lord. “Now pet [people] can look at this research and, if they [have] a cat, maybe they will consider that they will be able to put identification on them. A collar with an I.D. tag is probably a cat’s greatest chance of ever being re-homed or brought back if it is lost.” Less than 2 percent of lost cats make it home, Lord added. Collars and proper identification would, she believed, change that.

Pamela Merritt, author of the Way of Cats blog, doesn’t see it that way. To her, the problem with collaring is simple. “[C]ats don’t really have collarbones,” she points out. “They have a rudimentary clavicle that is free-floating. So cats are used to sliding into spaces that are too small for them. If they have a fixed collar, this is going to get them caught.”

Merritt mentions that less-than-2-percent figure but explains that it actually refers to the number of cats retrieved from shelters and not to lost cats in general. “So let’s not rely on collars and I.D. tags when microchipping works so much better.”

That figure, by the way, comes from an ASPCA study, and Merritt is closer to the mark: 2 percent of lost cats turned up at shelters. The others either returned on their own or were found by their people.

We put these on our first 2 kittens, Cricket and Kilah. Then, one morning, as Tim and I were about to leave for work, we heard a noise — it was Kilah trying to unhook her safety collar from her lower jaw. We quickly removed the collars from both sisters and replaced them with buckle collars; we made sure that we could fit 2 fingers between the collars and their necks, and the kitten-girls were good to go.

Years later, I tried another breakaway collar on Circe, our blue Aby. Zeke and I came home that evening to find that she had somehow managed to tighten the elastic on the collar by kicking/scratching at it and was slowly choking. I got the collar off, and she was fine except for some abrasions on her tiny throat. But I still shudder when I think what might’ve happened had we not come home early.

Safety collars, according to my vet, work better on outdoor cats than on indoor ones. The collar breaks away if it gets caught on anything, and the cat is free.

Microchipping is a pretty quick procedure for cats:

Microchipping is painless and it also ups your chances of seeing your lost pet again. And if someone steals your cat or takes them in, thinking that they’re a stray, that little chip will prove beyond the proverbial shadow of the doubt whom they belong to.

An indoors-only feline is probably fine with just the chip, though some people will do both the chip and the collar, just to be on the safe side. Pawl, who lives in Florida, recently had an experience that suggests there’s a benefit to this 2-pronged approach. One evening, while she was still without power from the hurricane, she got a call from her son in Connecticut. “Mom,” he said, “it’s 10 o’clock. Do you know where your cat is?”

Saba, one of the Burmese, had snuck out and started chatting up the neighbors round the corner. They, in turn, saw the microchip tag on his collar “and called the 800 number imprinted on it. Without the collar tag, they would have had to wait until a vet’s office was open and had power so the cat could be checked for a microchip.”

So it’s not exactly a clear-cut issue. What is clear, however, is that even an indoor cat needs some sort of safeguard in case they pull a Harry Houdini escape on you. And if your cat is an indoor-outdoor one, they need it all the more. It could mean a world of difference for both of you.

Get Free Recall Alerts! Sign up now to Petful’s twice-monthly email newsletter, and you’ll also get our FREE pet food recall alerts. You’ll be among the very first to know about recalls. Click here to sign up now (it’s free).