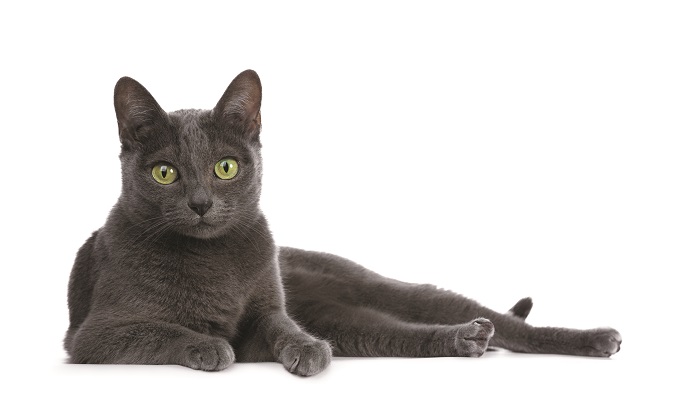 
Do you crave love and luck? Then you’ll most definitely covet a cuddle with the Korat — a silver-toned sweetheart who will make you purr!

The Korat’s coloring is blue-gray in hue but has a halo effect that casts a silver sheen upon his coat, making him glisten and glow in an oh-so-glamorous way.

First, let’s get the pronunciation straight — it’s ko-RAHT, not KO-rat. Now that you know how to say it, let’s chat about his history. Discovered in Ampur Pimai and named after Thailand’s Korat province, this cutie was bestowed his moniker by a true royal: King Rama V. Though the Korat made an appearance in The Cat-Book Poems (circa 1350 1767), the breed didn’t appear in the United States until 1959, when the cats were imported from the Mahajaya Cattery located in Thailand.

3 The eyes have it

Are the eyes always green? They are! Though due to the fact that Korats are slow to mature, their emerald green gaze typically doesn’t develop until they are between 2 and 4 years of age; before that, their eyes are an amber shade that turns golden-green, then reaches pure peridot once adulthood arrives.

The Korat’s eyes are always a beautiful green.

The Korat is “made up” of five hearts. The first heart is the typical one that we all have located within the chest. The second is visible on the exterior of his muscular chest seen when this little guy is in a sitting position. The other three can all be found on the head. First there’s the heart-shaped head itself; then there’s the heartshaped nose; and the third heart can be seen when you stand above the Korat and look down over the top of his head.

The Korat’s physique has actually been compared to that of a body builder due to how firm his form is. Though graceful and agile, his muscular shoulders accentuate his strength, making him a furry force to be reckoned with!

The Korat is known as the Si-Sawat cat (pronounced see-sa-what) by Thai people; but there’s another name and description used by the Thai that is even more intriguing: “The cat ‘Maled’ has a body colour like Dok Lao. The hairs are smooth, with roots like cloudsand tips like silver. The eyes shine like dewdrops on the lotus leaf.” Dok means flower, and lao is an herb, like lemongrass, with silver-tipped flowers.

A cousin of the talkative Siamese, the Korat is far less vocal — emitting a chirp every now and again to communicate his feelings with you. Sometimes described as a bit stuck-up, this is a breed known for his loyalty, selecting one or two humans whom he fully turns his heart over to. He’s also a calm kitty when it comes to children, so he makes a wonderful family feline!

Though a gentle guy who loves a very quiet atmosphere and never passes up a snuggle session, the Korat is very fond of playtime and never misses the chance to show off his impression of a race car as he zooms through the house!

9 Practically purrfect in every way

The Korat craves companionship. He is definitely a lap cat who will stick to you like glue and does best residing with a human who works from home or has another animal to keep him company to stave off separation anxiety. That said, he will go his own way from time to time (as long as he knows you’re within paw’s reach). His one personality flaw? He doesn’t like to share. He’s especially possessive of his toys, so make sure that you have plenty to go around!

Henry the Search Cat is on the Case
Cute Kittens Play in Ball Pit
Make this Fluttery Feather Cat Toy
Since Birth, Pathetic Kittens Were Adjoined All Together Like Siamese twins | Kritter Klub
HELP! We found abandoned kittens!