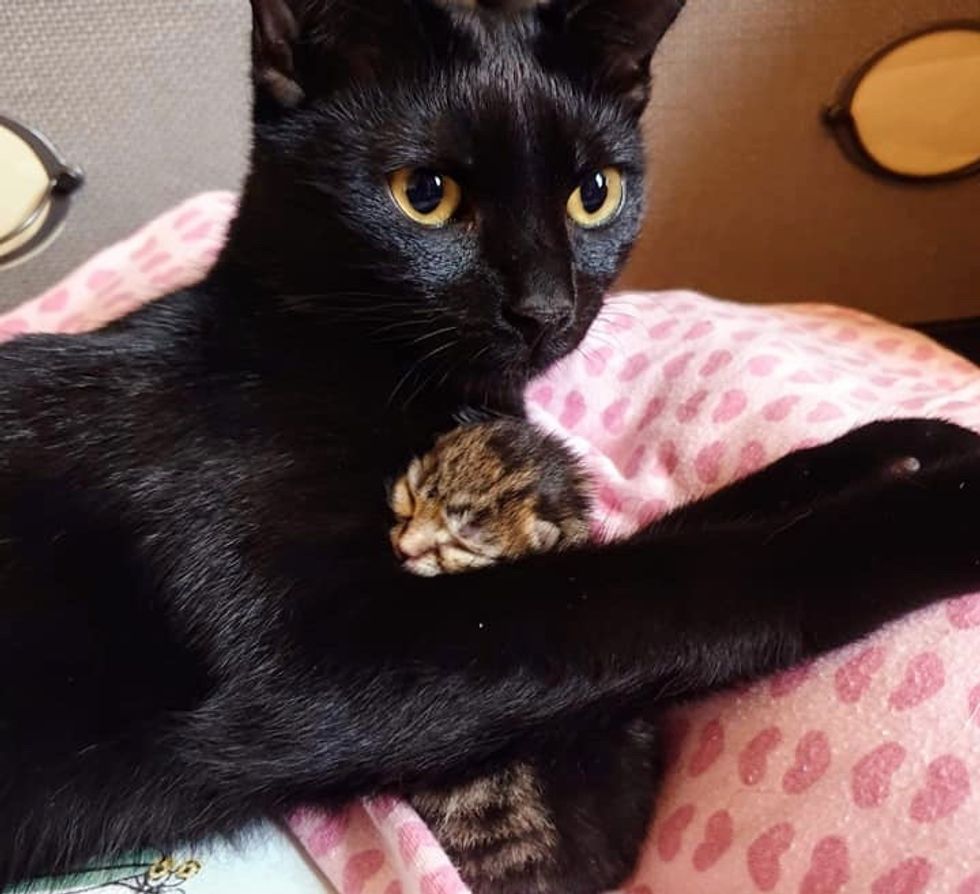 
A tiny orphaned kitten was brought to a rescue, in need of help. A cat who shared a similar beginning, took the kitten under her wing.

Two weeks ago, CatRescue 901, a rescue group in New South Wales, Australia, took in a palm-sized kitten who had been found as an orphan.

“We believe it’s been a long time since (the kitten) was fed,” Jenny Storaker, founder of CatRescue 901, shared with Love Meow.

Katerina, a foster volunteer, immediately stepped up to help. The kitten named Flora weighed only 71 grams, very small for her age. Despite being so tiny, she had a strong grip and incredible fight to live.

Within a day, she figured out how to eat from a syringe.

After each feeding, she fell asleep on her foster mom’s chest, tucked under her shirt. She could hear the heart beat, which was comforting to her.

At such a tender age without a cat mom, little Flora was vulnerable to infections and challenged in many ways. She needed daily treatment and intensive care to keep her strong.

It was touch and go for a while, but the kitten continued to fight, and Katerina fought alongside her. After many sleepless nights, things began to look up for the little one.

“Flora fought her way through her crashing thanks to an enormous effort from Katerina,” Jenny added.

Katerina’s resident cat Sabrina came to meet the kitty and offered a helping paw — just like Flora, Sabrina was rescued as a tiny singleton.

She was about the same size as baby Flora and dealing with the same battle for survival.

“It was almost a year ago that Sabrina was this little,” Katerina told Love Meow.

Now all grown up and adopted by her foster family, she is giving the kitten the same love she received when she was rescued.


Sabrina when she came to her foster homeCatRescue 901

Sabrina took Flora under her wing as if she understood just what the little tabby needed.

She grooms her after each feeding and is there for her when she needs a cuddle. Flora nuzzles in the fluff of her belly and purrs herself to sleep.

“This is great news because it will really help Flora’s development and will to live,” Jenny said.

Flora is so tiny but a mighty warrior kitty.

Now at two weeks old, she is about the size of a newborn.

The tabby girl still has a lot of growing to do. She is very vocal and makes sure everyone hears her when it’s meal time.

Flora is making strides every day.

She is so happy to have loving foster parents and a feline sister to cuddle and love on.

Related story: Cat Who Spent Most of His Life on the Street, Helps Orphaned Kittens In Need

Stray Cat Comes Running When Rescuers Find Her and Her Kittens Outside Apartment
Neighbors Helped Stray Cat and Her Kittens off the Street So They Could Have Better Life
Diana and her Quarantine Morning Routine with Kitten
10 Tips for Traveling with Cats on a Road Trip This Summer
No, Most Veterinarians Are Not Trying to “Upsell” Their Clients