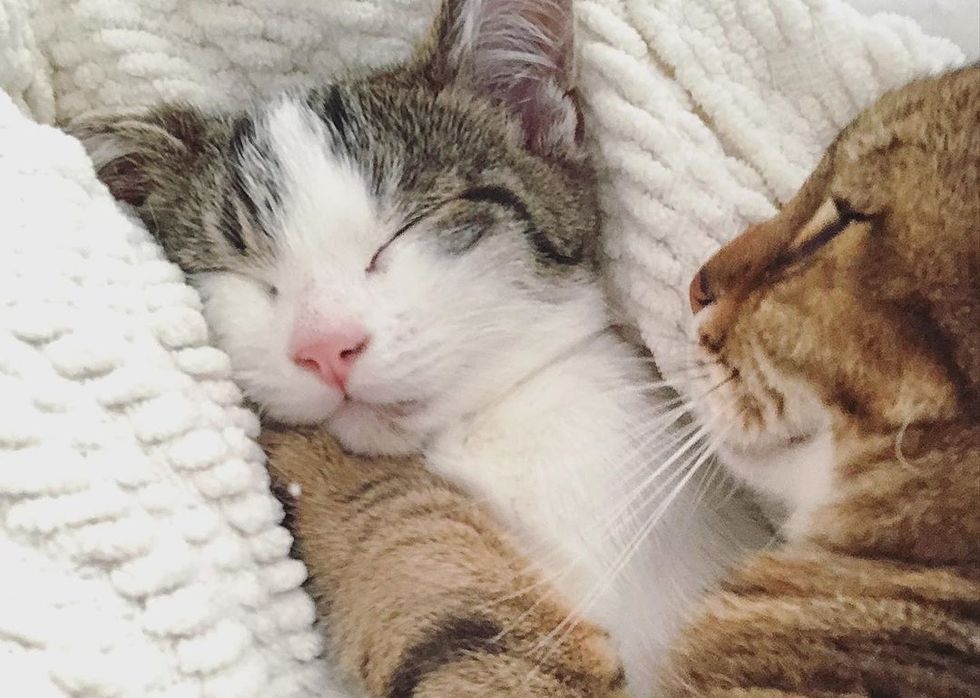 
A shy kitten who was found on a porch, is so happy to have someone to cuddle.

Nikki Martinez, an animal rescuer based in Las Vegas, was working on a TNR (trap-neuter-return) project with her husband when they came across a kitten sitting on a porch.

The kitty was a bit wobbly and had a bent ear. They took him and a few other kittens to a local cat clinic that day, to have them spayed, neutered and vaccinated.

The wobbly kitty was the shyest of all. While other kittens would hiss and spit at people, he just quietly protested and didn’t resist when rescuers tried to pet him.

“Once he calmed down, he’s very sweet — shy but sweet,” Nikki shared with Love Meow.

They took him out of the crate for a hug. Right away, the kitten nuzzled into their arms and just wanted to be cuddled.

They named him Diddy, and he has a mild form of Cerebellar Hypoplasia (CH). He needed a home, away from the outdoors, so he could thrive.

Diddy’s bent ear was the result of a wound he got outside. “That’s the problem with having his condition and being outside. He’s too slow to get away from any predators or cars passing by.”

After a few days of adjusting to the indoor life, the sweet kitty came out of his shell and started to play. He was so happy to have a roof over his head, good food and all the fun toys to play with.

Diddy never let anything stop him. He was determined to do anything just like other kittens and always wanted to play.

Once he found his footing, he would scamper around the room like he owned it. In less than two weeks, he blossomed into a confident, playful, cuddly boy.

“He seems to like being held as he purrs instantly when we pick him up,” Nikki shared with Love Meow.

A few weeks after Diddy was rescued, he found the home that he always wanted.

A couple fell in love with the wobbly kitty and knew he would make the perfect addition to their family.

Watch Diddy and his journey in this video:

After exploring around his new abode, Diddy stretched out on the floor and claimed the place as his own.

He’s befriended his feline house mates and wants to know everything about them.

Diddy has quite the toy collection. He is curious about everything that moves. When he is not playing, he’s snuggling with his humans or a feline friend, purring up a storm.

The once shy kitten has come a long way.

Diddy is living life to the fullest with his forever humans and feline siblings.

Related story: Stray Kitten Sneaks in Family’s Yard for Food and Has Her Life Turned Around

Help Your Cat Love The Great Indoors
Street Cat Found Kind Family to Help Her Kittens and Began to Trust
How To Use An Amazon Box To Entertain Your Cat All Day Long
Funniest CHIUAUAS in the WORLD – Must WATCH!
Kitten Guards His Tiny Adopted Brother and Won’t Leave His Side