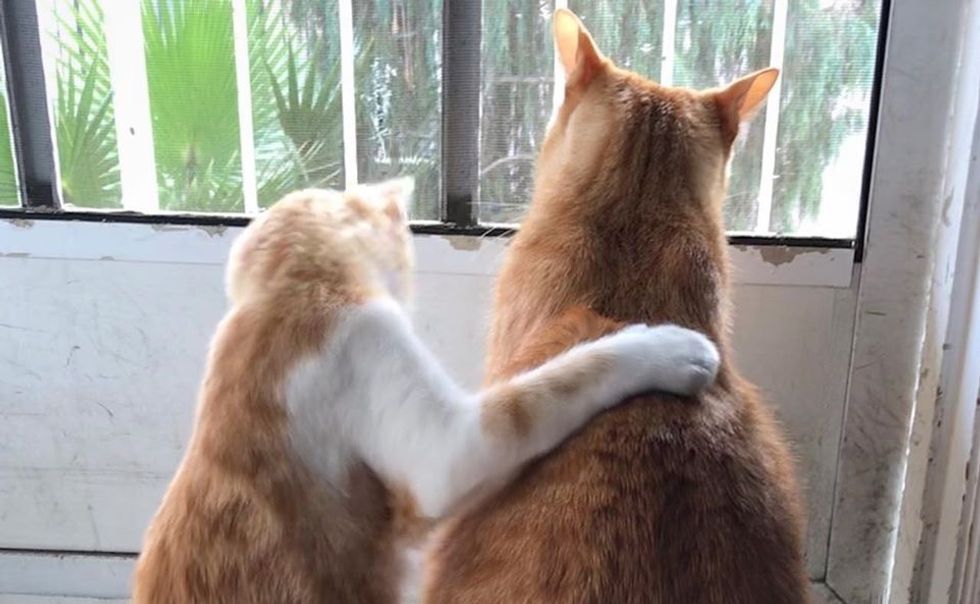 
A family rescued a stray kitten and tried to find him a home, but things began to change when their cat took him under his wing.

A scrawny little kitten wandered his way to a woodshop in Long Beach, California, meowing nonstop for attention.

Justin LaRose, the shop owner, heard his plea and saw the little guy push his face and paws against the screen, trying with all his might to get in. “He was covered in paint. Once I heard that cry I knew it was serious,” Justin shared with Love Meow.

He picked up the kitten and noticed how dirty and skinny he was. The little one turned his purr motor on full blast and seemed so thankful to be rescued.

After a trip to the vet, the kitten was much cleaner, happier and finally got some food in his belly. Justin and his wife, Kristin, already had three cats and a dog at home and a “guard” cat at their shop. They decided to foster him until they could find him a good home.

Their plan was to acclimate the kitten (named Cru) into indoor life and socialize him with help from some of their resident animals. Out of all their cats, Ollie the 6-year-old ginger has always been the sassy one.

Ollie was not an easy cat when he joined the family. “It took four years and more patience than we ever knew we could have, but he finally calmed down. He loves the dog but is notorious to the other cats,” Kristin said.

Within a day after Cru moved in, they were stunned by what they saw.

Ollie immediately took the kitten under his wing and showed him such gentleness the couple never knew he had in him.

He was very sweet and patient with the little newcomer and didn’t mind his many antics.

“It’s crazy to watch him have a little buddy that he’s so gentle with even though Cru is so rowdy with him,” Kristin added.

Ollie has filled the role as Cru’s big brother, reassuring him that he always has a friend to lean on.

They eat together and snuggle with each other when they nap.

With Ollie by his side, the little former stray has grown into a confident, sassy cat, mirroring his big brother.

The couple thought the kitten would remain a foster until the right home came along, but the little guy had already found it.

“He blossomed with the animals at my apartment. I am a foster fail and I’m proud of it,” Justin shared with Love Meow.

Ollie shows him how to play like a cat and is always there for him when he needs a cuddle.

At six months old, Cru is quickly catching up in size. His bond with Ollie is stronger than ever.

“I never thought Ollie would have a cat buddy like this,” Kristin said.

“Their bond is extra special.”

Related story: Family Wanted to Get Their Puppy a Kitten But Stray Kitty Found Them Instead