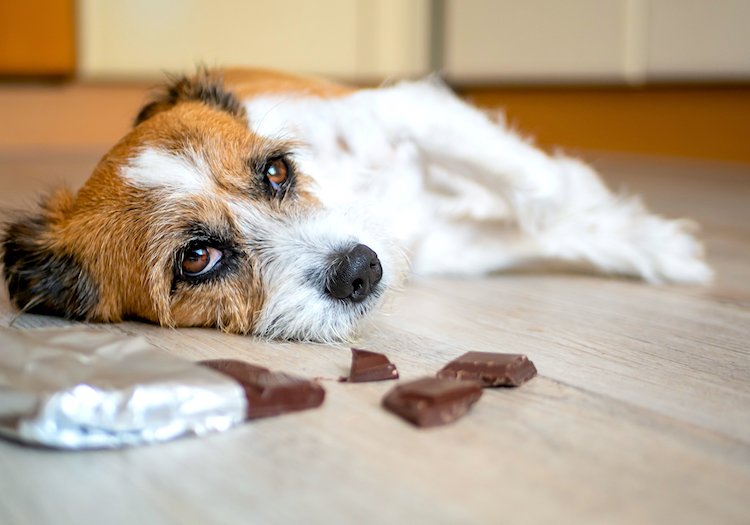 
As the movement to legalize and decriminalize marijuana has grown in recent years in the United States, marijuana toxicity in pets has been on the rise. As of 2020, more than half of states have passed laws to either fully or partially decriminalize possession offenses.

It’s no coincidence from 2018 to 2019, the ASPCA’s Animal Poison Control Center reported a whopping 765% increase in marijuana cases involving pets. This is a nationwide trend.

Now, with sales of cannabis edibles shooting through the roof during the COVID-19 pandemic, marijuana toxicity in pets is an even more important topic than ever before. Here is what you need to know.

I first wrote this article in 2014, back when I owned a rural veterinary practice. By coincidence, right after I started writing that original draft, I saw the worst emergency case of marijuana/chocolate toxicity in a dog I had ever seen as a veterinarian.

My new little patient had multiple strikes against him:

Even if his folks had not told me what he had gotten into, the little dog’s breath was a dead giveaway. He reeked of marijuana. I had never smelled this strong of a pot smell on a dog before.

The good news? The midnight brownie bandit recovered fully. He saved his own life by vomiting up a large amount of his hash bash, and then we supported him through his detox phase.

Here’s a quick video of my patient:

How Serious Is It If My Pet Ingests Marijuana?

Thankfully, veterinarians can usually relax and laugh — a little — when we see “a party animal” fall into our hospital.

Marijuana has a “wide margin of safety,” meaning it takes a great deal of the substance to be lethal. “There’s nothing about that actual drug itself that will kill them,” says Dr. Dorrie Black, DVM, MPVM. “It doesn’t cause any organ failure. It doesn’t cause liver failure, renal failure.”

But that doesn’t mean it isn’t a serious concern. “Pets don’t get stoned — they get poisoned,” says Dr. Mark Liberto, DVM.

In a few cases, small dogs have died after ingesting large quantities of food containing marijuana:

“There may be additional toxic ingredients involved — such as chocolate, raisins or xylitol — which result in a poorer prognosis. Cats may also directly consume the plant material,” says the American Veterinary Medical Association (AVMA).

Also, be aware that the drug can sedate a pet so fully that they end up inhaling their own vomit (aspiration), which can be deadly.

“If you know or suspect your pet of having been exposed to any form of cannabis, please consult your veterinarian immediately,” the AVMA advises.

Signs of Marijuana Poisoning in a Dog or Cat

If you are chilling with your pet, the pair of you will look just about the same. Your pet may also vomit, become agitated, or exhibit urinary incontinence or urine dribbling.

Here’s a deeper look at the signs of marijuana toxicity in pets:

With any luck, you yourself are not in the same condition, so you can get your dog or cat to the vet right away.

The intoxicated state of the pet is a big clue. But other, more serious toxins can create the same signs.

“As the attending veterinarian, I consider the possibility of other factors contributing to the overall picture of health or illness,” says Dr. Patrick Mahaney, VMD. “Did the pet consume only cannabis? Could prescription or over-the-counter human or veterinary medications, other recreational drugs, or unknown intoxicating substances be involved?”

Being completely up front and honest with your vet is a great help, but many people are too embarrassed to admit to the marijuana. “Most are somewhat reluctant to share the truth, but ultimately concede under gentle, direct questioning,” says Dr. Mahaney.

If the person is truly unaware of any drug exposure, there is a quick toxicology screen available to vets that tests for cocaine, THC (the psychoactive ingredient in marijuana), opiates, methamphetamines, benzodiazepines and oxycodone. Being able to identify the drug helps us in treatment.

If the pet tests positive for THC and a non-pot-smoking pet parent has brought the pet in, then an unpleasant conversation will be taking place when their teenager gets home from school.

How Toxic Is Marijuana to My Pet, Really?

Officially speaking, there is no safe level of exposure. But, all in all, ingestion of marijuana by a pet is fairly safe — at least compared with other drugs.

Most pets get into marijuana accidentally. They find the bag of weed, partially smoked joint, gummies or brownies and then proceed to binge. If you’re honest and knowledgeable about the amount and source of the drug, it can help your vet a great deal with the treatment plan.

Occasionally I have had some kids get their dogs high deliberately, and this is just stupid. Unfortunately, people who exhibit this level of irresponsibility are probably not going to take their intoxicated dog to the vet.

Hopefully their pet will be able to sleep off a small amount of marijuana without serious side effects, such as seizure or coma, while everyone else continues to party.

Onset of symptoms after ingesting or inhaling marijuana is 30–60 minutes in most pets. Depending on the dosage and strength of the drug, these symptoms can last 18–36 hours. (Yes, up to a day and a half.)

If we have an intoxicated pet, supportive care is all we can do. There is no antidote to reverse the effects of marijuana. Basically, the pet just has to sleep it off under supervision.

“Having treated innumerable cannabis toxicities, I feel comfortable that my patients will make a full recovery with the appropriate care,” says Dr. Mahaney.

Some clients have told me they were reluctant to “come clean” about their pet’s marijuana ingestion because they thought I would report them to the police.

Veterinarians have nothing to do with reporting your use or your pet’s marijuana use to the authorities. “The veterinarian is not under obligation to report the owner/client to the police, and it is better for all involved to treat the animal appropriately,” says VRCC Veterinary Specialty and Emergency Hospital of Englewood, Colorado, a state that legalized recreational marijuana in 2014.

Actual animal abuse is a different story, and, yes, vets are responsible for reporting abuse — but accidental marijuana ingestion does not qualify.

My veterinary clinic once had a young person bring in her adorable little terrier mix for staggering and strange neurological behavior.

After taking a look at the dog’s dilated, glazed eyes and observing his strange pattern of walking, we had our suspicions.

“No, I don’t think he could have gotten into anything. There’s nothing around,” she told us. “We watch him like a hawk. He woke up like this.”

After about an hour, the teetering terrier seemed quite a bit better.

I took him out for a little walk to assess his neurological status. He seemed somewhat uncomfortable in the rear end and stooped to poop. With some difficulty, he pooped out some large cocktail almonds, at which point he seemed much happier.

I believe this pup partook in someone’s pot the night before and then found some snacks to satisfy his munchies. Within a few hours, he was as good as new.

Although marijuana has a large safety margin, it can still make your dog or cat quite ill and neurologically impaired.

Baked laced goods seem to be much more of a danger. Where the human party animal might have 1–2 brownies and call it a night, the canine party animal will eat the entire tray. This can be very toxic.

There are more marijuana edibles around than ever before, so please keep your pets away from them.

And assume nothing about visitors. Old Uncle Morton just might have some weed in his coat pocket that could mean a trip to the emergency vet if your dog gets into it.

CBD oils and edibles are not completely off the hook, either — there have been documented reports of pets developing THC signs after ingesting CBD products. Please be careful with these, too.

Even medical marijuana is a complicated topic among veterinarians. For more on that, see my article “When Will Medical Marijuana Become Legal for Pets?”

This pet health content was written by a veterinarian, Dr. Debora Lichtenberg, VMD. This article was originally published in 2014 and is regularly updated. It was last reviewed for accuracy and updated July 13, 2020.
If you have questions or concerns, call your vet, who is best equipped to ensure the health and well-being of your pet. This article is for informational purposes only and is not a substitute for professional medical advice, diagnosis or treatment. See additional information.

CATS vs DOGS competition; Who is FUNNIER?
Kitten Found in Backyard with His Siblings, Grew Unique Coat, Determined to Thrive
Kittens with Sweetest Smile Seek Attention from Everyone and Hope for Dream Home Together
Woman Helped Kitten, Couldn’t Stop Thinking About Her and Traveled Across States to Bring Her Home
Hissing Kittens Are So Scared But With Time And Love Something Amazing Happens | The Dodo Cat Crazy