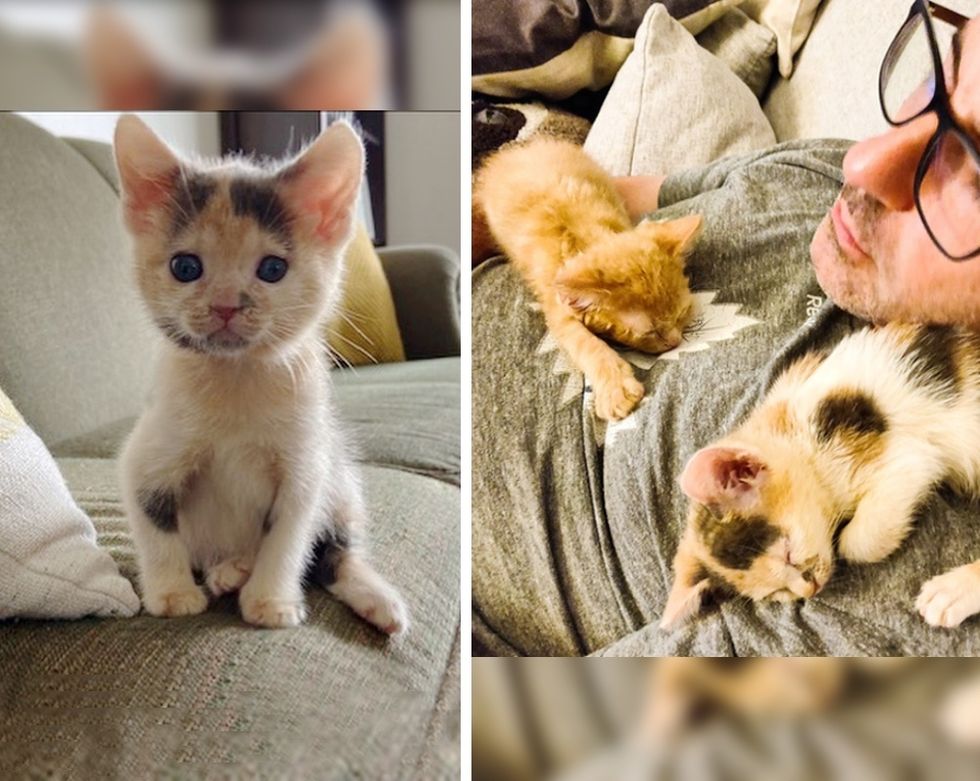 
Two kittens found the perfect shoulders to cuddle on and the family of their dreams.

A bonded pair of kittens was rescued from a hoarding situation along with 150 other cats. Toronto Cat Rescue brought them to safety and Abbey Cat Adoptions took them in so the feline siblings could have a chance to thrive in a foster home.

The brother and sister duo bounced back with love and care from their foster family. They no longer needed to fight for food and could finally be the center of attention. The sweet calico was an instant cuddle-bug and would snuggle up to anyone around her for kisses and TLC.

“Their lives have taken a major turn for the better since being rescued and they have become healthy and happy kittens,” Abbey Cat Adoptions said.

When the two besties were ready to look for their forever home, the rescue knew they had to be adopted together as they were a packaged deal. The kittens shared a very strong bond and depended on each other to thrive.

Massimo and Zylees, a couple from Toronto, were looking for a new addition to their family after they said their goodbyes to their beloved tortie cat Moss of 16 years. They stumbled upon a post about the two bonded kittens and were instantly smitten.

They reached out to the rescue and turned out to be the perfect match. The kittens were then named Jessie and James, and their exciting new chapter officially commenced.

On the first night home, the two kittens quickly made their way up their dad’s shoulders and fell right to sleep.

“They were immediately friendly and in need of lots of cuddles. I was surprised by how sweet they were from the start,” Massimo told Love Meow.

The kittens felt right at home and never once tried to take refuge. They were completely fearless and claimed their new home as their kingdom.

The duo explored around the house together, checking out new scents and inspecting everything that they could lay their paws on. They weren’t shy of asking for attention and cuddles.

“They are always around us, ready for a kiss or a hug,” Massimo added.

“James in particular plays around the house like a crazy kid, jumping and running. Sometimes, he stops to sit on your belly, give you a kiss or a headbutt before going back to chase Jessie or his own tail.”

Watch the two best friends in this cute video:


Jessie and James the kittens

James the ginger is a bona-fide mischief-maker, who is constantly on the lookout for new antics. When he needs a recess from trouble making, he will curl up in his human’s lap to recharge.

Jessie embodies the calico cattitude. She follows James’ lead and is his little partner in crime.

When James discovered his own reflection in the mirror and tried to out-jump it, Jessie followed suit and joined the game.

“She follows her brother’s example and plays a lot with him. They are always together,” Massimo shared with Love Meow.

“Jessie and James have come far from recovering from a hoarding situation with 150 cats in a Toronto apartment to their new home with enthusiasm,” Abbey Cat Adoptions said.

“They are in prime condition with their health and thriving. It truly is wonderful to see how animals and humans can support each other given the correct resources, tools, and environment.”

The two siblings have grown by leaps and bounds in just a couple of months. They continue to bring joy to their family, and their home never lacks laughter.

“They needed us, and we needed them. We couldn’t have been more lucky to have them.” Massimo said.

4 Books to Read (or Gift) This Holiday Season
How to Choose the Best Cat Subscription Box
Cat Showed Up at Family’s Door and Asked to Be Let Inside After Spending Years on the Streets
Pint-sized Kitten Found in a Bush, Blossoms into Beautiful, Brave Calico
Kitten Won’t Go Anywhere Without Her Teddy Bear After Being Found Alone Outside