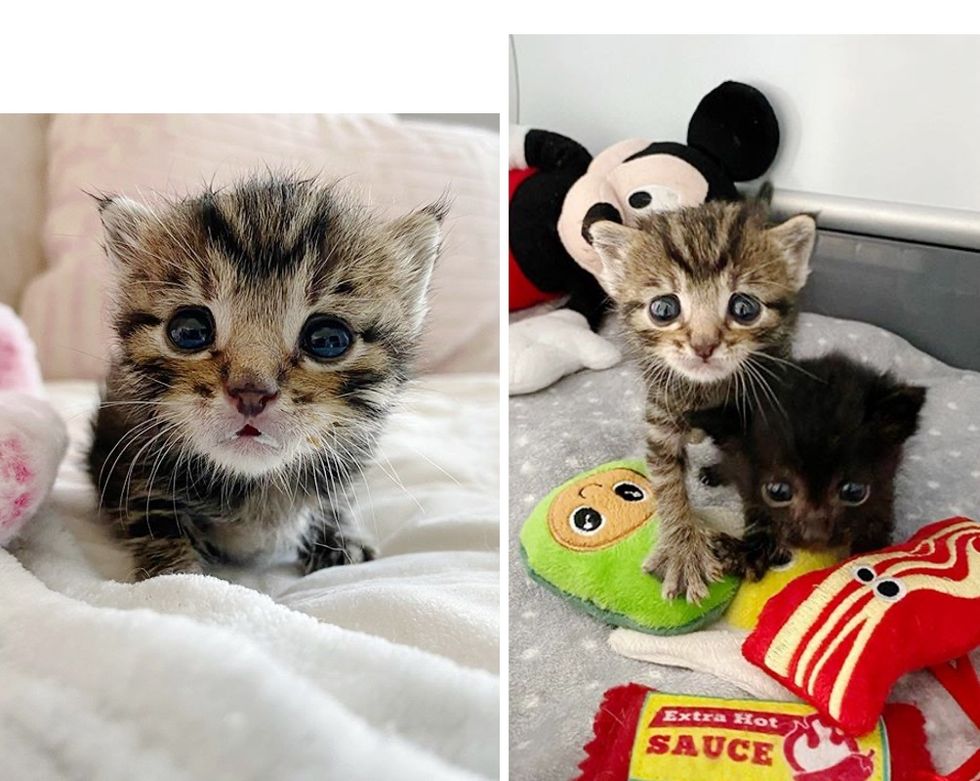 
A tiny kitten with big eyes found a kind family to help him and his bonded brother thrive.

Patricia Lika, a fosterer (in Las Vegas) who specializes in critical kittens, was contacted about two feline brothers needing around the clock intensive care. The kittens were rescued from a local shelter with their mom who was unable to feed them.

“I got a plea for help for the two babies who had an infection, multiple mouth sores and couldn’t really eat, so I took them in,” Patricia shared. “They are both so precious and deserve a chance so we will fight for them.”

The kittens were immediately started on treatment and placed in a cozy incubator to help regulate their body temperatures. Hampton, the little tabby with a pair of large eyes, begged for constant attention and comfort. He was adamant about staying close to his caretaker.

Hampton would cry incessantly until he was picked up and cuddled. To meet his many demands, Patricia put him in a pouch so she could carry him around like a kangaroo baby while she went about her day.

“He was a little weak upon arrival but with his sugar level regulated, some antibiotics and tender loving care, he’s on a fast track to becoming quite the little chonker.”

His bother, Hudson, had a more difficult time fighting to bounce back. Despite being very weak and frail, the little guy never gave up. “I didn’t think he was going to make it the first night, and I was extremely scared but he is a fighter,” Patricia added.

While the tabby boy quickly improved, his energy seemed to have rubbed off on his brother.

A couple of days later, Hudson started to perk up and his appetite also increased. With encouragement from little Hampton, the two became more active and vocal each day.

“Hampton and Hudson are doing fantastic. Hudson has made such an improvement. He’s a completely different kitten — he’s alert, walking around, playful and eager to eat. They are both such happy babies, who just purr nonstop and roll over for belly rubs,” Patricia shared.

The brothers are starting to explore around the incubator. They will perch on the railing next to each other, watching their foster mom prepare their meals.

They enjoy observing Patricia ever so attentively while she fixes their food, as if they are making sure that the bottle or syringe is filled to the brim.

Despite being a petite kitty, Hampton the tabby has a large personality besides those big eyes.

Hampton insists on being the first baby to receive his meal, and Hudson always patiently waits for his turn.

Every time, they get new toys from their foster mom, the brothers inspect them together and never wander far from each other.

Hudson the quieter of the two is as sweet as can be. He follows his brother’s lead and always looks up to him. The pair has come so far since the day they were brought to their foster home.

Little Hampton demands to be cuddled whenever Patricia is available, and won’t take no for an answer. When food is served, the confident tabby prefers being hand-reared while sitting comfortably in Patricia’s arms.

“Hampton likes to be held like a baby when he’s eating so he feels your closeness. Even when he’s not eating, he’s nursing on the bottle and loving his mama time,” Patricia said.

With a second chance at life, the two brothers are making strides every day and well on their way to a bright future ahead of them.

“I’m so happy to be these little munchkins’ foster mama,” Patricia said.

Related story: Kitten With Mitten Paws Cuddles Her Brother After They Were Rescued Together

Rescue Poor Baby Cats Abandoned By Inhuman | Adopted Three Kittens Very Pitifully
Cat Showed Up at Family’s Door and Asked to Be Let Inside After Spending Years on the Streets
CATS vs DOGS competition; Who is FUNNIER?
FORGET CATS, HUSKIES are the FUNNIEST ANIMALS!
How to Choose the Best Cat Subscription Box