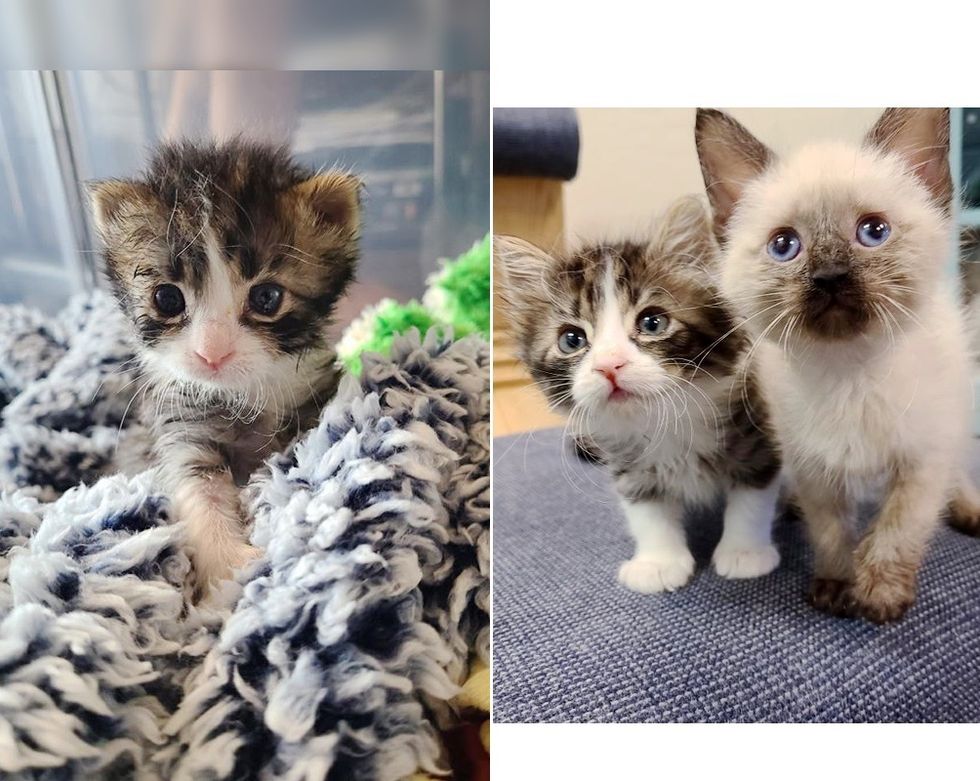 
Champion the kitten is determined to keep up with other kitties after bouncing back on his three paws.

A litter of five kittens was surrendered to an animal clinic in Phoenix, Arizona after they were found as orphans.

They were less than a day old, still with their eyes closed. One of them had an injured foot and was the tiniest of the bunch. His name is Champion.

The clinic reached out to Shelbi Uyehara, founder of Jin’s Bottle Babies, an all-volunteer rescue, and asked if they could take them in. Without hesitation, Shelbi brought the five motherless kittens into her care and started around the clock bottle feedings.

The kittens were hand-reared every two hours and stayed in a cozy incubator covered in blankets and snuggle toys. Champion was the runt of the litter but a fighter from the start.

“We got them at about 12 hours old and all of his siblings were of normal birth weight, but Champion was about 20 grams less than them,” Shelbi told Love Meow.

The little tabby always tried to keep up with his bigger siblings and didn’t let anything slow him down.

“His paw was probably strangled by the umbilical cord during birth. When he was about 10 days old, the (bad) foot fell off, but his leg healed wonderfully,” Shelbi added.

Champion reached one milestone after another despite having just three paws. He was active and curious, always watching his siblings, trying to imitate them.

The little tri-pawed kitty followed his litter mates around the nest and never missed out on any action.

JJ, a Siamese mix, joined the litter of five after she came to the rescue as a singleton. She was quickly accepted by the other kittens. Champion took her under his wing and started cuddling with his new sister.

In just a few weeks, Champion caught up in size by eating to his heart’s content at every feeding.

While other kittens started to venture out of their nest and learn to walk, he figured out how to balance with three paws and worked his hardest to keep pace with his siblings.

Watch Champion the kitten in this cute video:

Whenever Shelbi enters the foster room, she’s quickly swarmed by the 4-legged kittens. But Champion will just hang back and stare at her with his big eyes, drawing her attention.

Once the kittens graduated into a large playpen, Champion made it his mission to play and roughhouse just like any other kitten. He was able to adjust and adapt quite remarkably.

The little wonder kitty may take a few tumbles but gets right back up and tries again. Now, he can run, jump and climb like a pro. Having three paws doesn’t limit him.

“He loves to play soccer with ping pong balls. He also loves to eat and sleep in your lap,” Shelbi shared with Love Meow.

Champion provides endless entertainment to everyone around him with his silly antics and quirky personality.

After scampering around the house, trying to chase after bouncy toys, the sweet tabby will crawl up on his human’s lap and fall right to sleep.

Champion insists on doing everything just like other kitties and is determined to live a full life.

Related story: Pint-sized Kitten Has Her Dream Come True with New Sisters After Being Found Alone Outside

Cat Took in Kitten Found in Garden and Touched People’s Hearts with What She Did
Kitten that Looks Like a Panda is Thriving After Being Found in a Box
Cat and Her Only Kitten Share Unbreakable Bond – Journey to Their Dream Home Together
Stella vs. Dieting – Catster
Baby Cats – Cute and Funny Baby Cat Videos Compilation